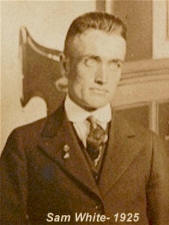 The White family has been involved in the organized sport of horseshoe pitching since about 1920 when Sam White organized the first horseshoe pitching leagues and tournaments here in the city of Erie, PA.  Sam was the founder of the Erie Horseshoe Club (currently the host club of the annual Eastern National Horseshoe Tournament).  He was a great pitcher in his time but he was better known as an organizer and promoter of the sport.  It was a natural progression for Sam to start peddling horseshoes on the side at all his horseshoe events and he quickly became known as the guy who sold horseshoes in the local area.

Glen Sebring, local club member and top pitcher once recalled of Sam... "When I was just a boy, I bought my first pair of horseshoes from Sam... he was a wonderful man... it was back in 1936... they were Gordons... $2.50 a pair!  I saved for months to get them... I think he would have probably given them to me though... he was that kind of a guy... always wanting to see the kids get into it, really anybody, but especially the kids... anyways, I threw them over the handle bars of my bike and rode straight from Sam's house on 21st Street to the courts in Glenwood to pitch 'em... I loved those shoes!  I had earned them and I was proud of that... That was sayin' somethin' in those days... I sure did get my money's worth out of them... I wore them out and then some!"  Back in the day, many people had stories like that about Sam and WD still strives for praise like that.

Sam's sons all took up the sport, but one really excelled at it... Francis White became an even greater champion in the sport and after Sam passed on, he also continued to distribute horseshoes part-time while running his successful grocery business in Erie.  Francis retired in the late 1970's and began focusing strongly on pitching horseshoes again... A natural merchant, he couldn't help but turn his hobby into a business by starting to peddle horseshoes again and before he knew it, he had a nearly full-time, nationwide horseshoe distributorship... the beginning of today's company.

When Francis finally fully retired at the end of 1995, his son and grandsons purchased the distributorship together, intent on preserving this long-standing family tradition.  Within six months, Bob & Bob Jr., decided to expand and begin manufacturing their own horseshoes.  The market was definitely ripe for a new manufacturer and they were able to capitalize... They started small, with just one model in that first year...  the struggling Glory Horseshoe, of which they purchased the manufacturing rights from local pro Dan Kuchcinski.  Soon they added their top selling Mustang Horseshoe and things just went crazy from there...  Now the company manufactures over twenty different models all under one brand... They are all known as Thoroughbred horseshoes... and we only sell horseshoes that we manufacture, which sure is a far cry from where we started back in 1995!  We're always looking for new horseshoe concepts, so it is likely that we'll be constantly honing our line of horseshoes for many years to come.

Tony White is the fifth generation to compete in the sport and participate in running the company.  Other family members are also involved in the business, helping the legacy of Sam and Francis White live on.  So, all told, that's about 90 years of history backing the company...  it spans five generations and three of them are still involved!  They all still play horseshoes all the time and have tested every shoe out there.  All five generations have competed in the men's championship class at the PA State Horseshoe Tournament, so they all know a thing or two about throwing the shoes too! 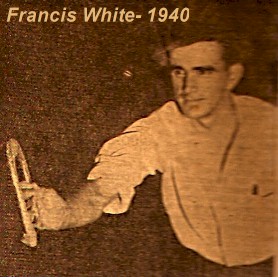 Over the years they've become pretty good at helping people figure out what's best for them in horseshoe pitching equipment... They have become trusted by the pros in the sport and will certainly do a good job for you too!

Here at White Distributors (WD Horseshoe Company), we love horseshoe pitching just like you do, but it seems we've taken it to the ultimate extreme... Lucky for you, though...  it's all to your benefit!  We're intent on making the best possible horseshoes and are committed to the never ending pursuit of making the "perfect shoe."